Let me start by saying that I didn’t really make Zoe Microfestival happen (because I wasn’t here yet), but I got an invitation to the Microsvacco anyways 🙂
So, basically what happened was that everyone who worked at the festival could come to Monte Nerone, to a small village called Bacciardi (between Piobbico and Cagli) to the house of Andrea, who was one of the main organizers of the Microsvacco.
When we arrived, we found out that only a small group of 11 people all together had made it, but it turned out to be a really nice group!
At the beginning, we were sitting around and talking, playing cards and video games. Since it was raining all morning, we didn’t have the chance to do our barbecue outside, so instead we had it inside of Andrea’s house. After we ate, we continued playing cards and video games until finally the sun came out again. Everyone who wanted to could change into their swimsuit, and then we went to the river Candigliano to swim (only the brave ones…it was cold!), relax, talk and nap a little bit after the delicious lunch.
Unfortunately, it started to rain again after two hours, so we decided to leave our peaceful place by the river and go to have a coffee and sweets at a café nearby.
Afterwards, we returned to Andrea’s house, picked up our bags and then went to the scout house where we were going to spend the night. After taking a shower (again something for the brave ones – no hot water!) and putting on some warm clothes, we were ready for dinner.

We ate in a beautiful little restaurant in Bacciardi named “Slowcanda”. I can truly recommend everyone to eat there one time, because it was honestly one of the best meals that I have ever had. They didn’t invent anything new; they just brought common recipes to perfection – yumm!!

After this awesome dinner, everyone was getting a little tired, but our energy was brought back to life when we met Penelope, a little fawn that was abandoned by its mother and lived with the family of Slowcanda. It was really cute, and everyone was amazed by it. 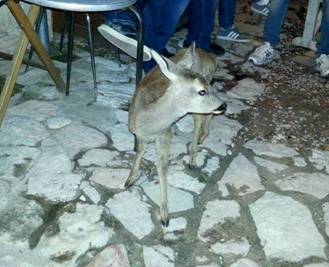 When everyone was ready to leave, we went back to the scout house were we spend an interesting night on the floor, since the house didn’t have any beds yet. Besides that, we all slept well – maybe because of the fresh mountain air!
The next morning, we had new energy and were ready for breakfast, which we had around 10:30 in Piobbico in a little bistro. During breakfast we decided that we didn’t want to end this adventure yet, but go all the way up to Monte Nerone, to enjoy the amazing view and nature. So after eating, we went on the 30 minutes way to the top of the mountain.
What can I say, the view was stunning. Everything seemed so far away, it was like we were on top of the world. A really awesome experience.
Some of us wanted to explore the nature and went to see “Grotta dei Prosciutti”, while others just stayed on a blanket, lying in the sun for 2 hours.

After the others came back from their tour, it was time to say good-bye. Laura, Alessandra, Vanessa and I went on our way back home, while the others stayed in a restaurant nearby and had lunch before going home.
All in all I can say that it was a really nice experience with really nice people, and I enjoyed this time a lot!