Hi again!
Early in the morning the trainers came with an energizer to wake the people up, people who were looking forward to recovering from the party time of the previous night.

Second activity : the big group was divided into small groups and acting as youth workers they had to answer to different questions.

1. Whom do you want to include?

To answer this question they had to think about two target groups they wish to include, and represent it with a frozen sculpture, whose meaning  the other groups had to guess.

The participants represented many different target groups, like wheelchairs users, people from the rural areas, homeless,  homosexual people, pregnant teenagers and so on.

2. How to include the target groups?

To answer this question the participants should think about inclusive tools/methods/activities that a youth worker/ youth leader/ volunteer may use in his/her work . The same groups as before discussed about this and each one represented a little theater sketch about the method they apply to the target groups they chose before.
For example, one of the groups represented a center with activities for old people, and a social center for homeless. One of the other groups, represented a center for deaf people to learn sign language, and a meeting of a citizen and the mayor, whor received the proposal for the construction of  The citizen went to major proposing the construction of infrastructures for disabled people.

So after some group reflection and discussion the participants tried to answer why should we include the target groups discussed before (people from rural areas, pregnant teenagers, blind people, people in wheelchairs, homosexuals, and so on).
The method proposed this time was called silent discussion.
The participants were invited to move into another room and discuss this question in silence, just via the written word. Two giant paper sheets were on two tables and people had to write down their ideas, comments, discussing about the asked question without talking the whole time. 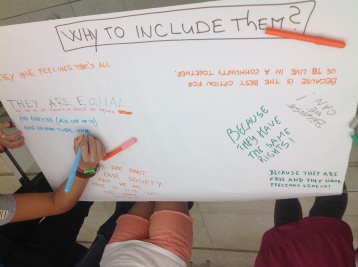 This last question has made the participants return to the initial phase, when it was discussed the definition of this complex word called inclusion.
They had to make short interviews in a creative way and present it to the other groups, in four different formats : a talk show, a daily news program, an educational program, and a soap opera.
Trough the creative process the participants were enjoying a lot, and results were truly funny. Good job boys.

The afternoon started with a reflection about the activities developed during the day. The concept of inclusion was discussed again with the assistance of the trainers.
Each participant gave his/her input about what they had learned and shared how surprised they were when meeting with immense ideas about inclusion, especially with regard to the target groups to be included.
During this discussion one of the participants, Ilaria from Italy, volunteered herself to explain her understanding of the word making a draw on the flip chart, a kind of a scheme.

“For me, there is society (and she drew a giant circle) and inside of society there are all these small groups (and she drew small circles inside the big one) that are the disabled people, the homosexual, the homeless people, etc inside. These groups are all separated and we should build  bridges to  connect us to them and among them”, she said.

Amongst the many things that were said I caught this strong sentence from Inga that, at least for me, sums up the way in which an inclusive mind should think:

After all this I had to stop my busy report and I jumped into the scene making a presentation about youth pass. I prepared my self a power point about the topic, not just explaining what is youth pass but also explaining why it is important and also how it is connected to the non-formal learning and the key competences.

The last activity of this afternoon was called NGO market. Each person (or group if they were representing the same association) presented their association.
Afterwards, people had some time to ask questions about their organisations, with the aim of getting innovative ideas and starting possible partnerships. 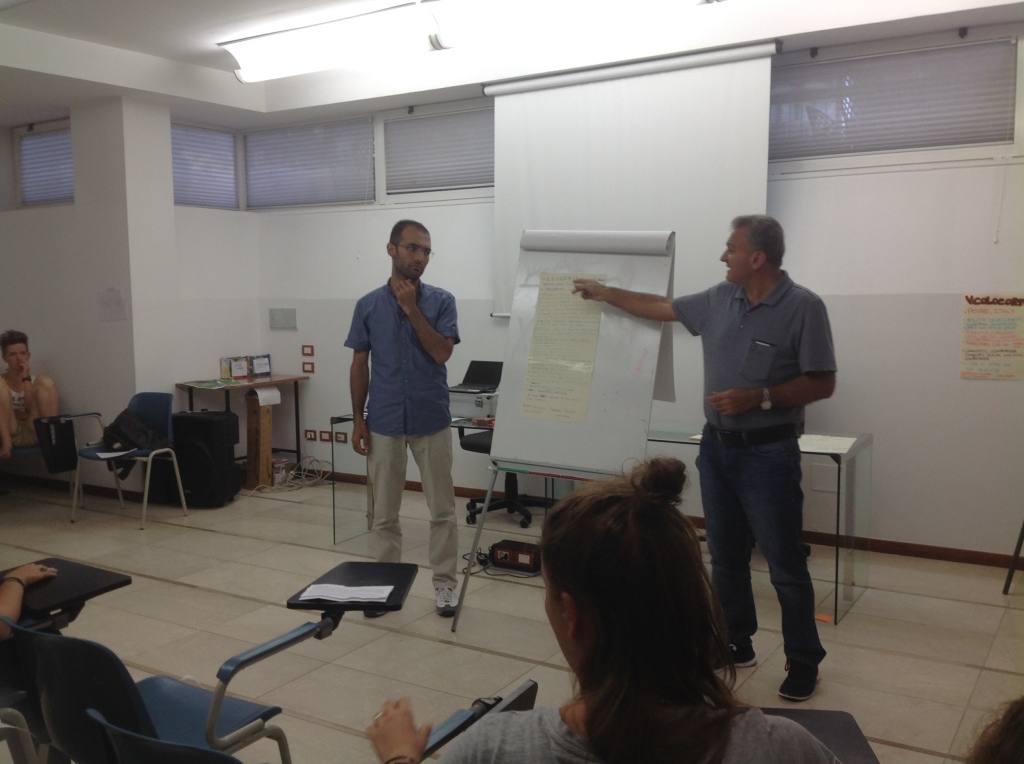 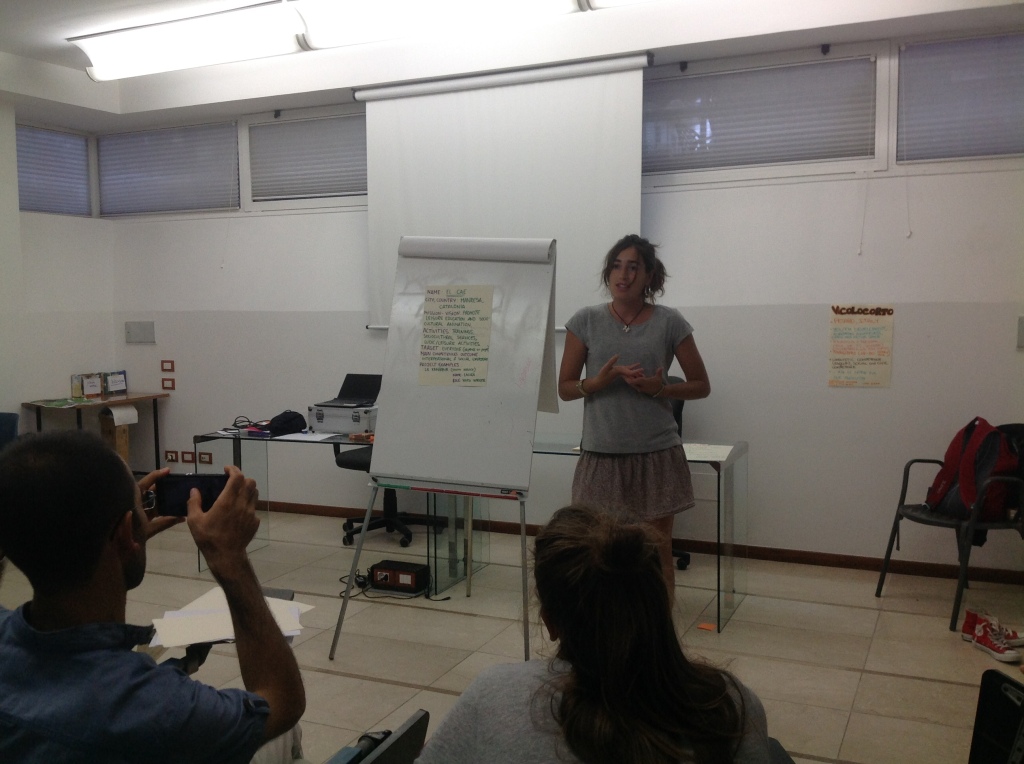 During the day I had the opportunity to interview some people. Here it is the result of the interview.

First of all to make different friends, to be introduced to other cultures is realy important for me. For me this kind of projects are important also to get new information about youth. Also meeting and discussing with this people we can find new ideas and possible partnerships.

Yes. About our main topic, inclusion. To be honest I didn´t know that the matter of inclusion is so complicated and important. I learn so many different definitions of inclusion. Before I had a simple idea of inclusion but after this project I learnt that it is not so simple and will return to my association with other perspective and new ideas.
Also I never thought that in the world there are so many target groups to be included.

I decided to participate in this project to increase my knowledge and know the world a little better, especially Pesaro.

Your opinion about the training until now.

I´m learning a lot about youth, about incusion and the importance of including all people even they are different from me.

Did you liked some activities in specific?

I decided to participate in this seminar because I am interested in know something new about youth work and inclusion. As I had some experience working with children I kind of want to develop my knowledge in this field.

I think the topic is really interesting and that the activities are really useful to involve all the group. I like a lot the silent conversation. 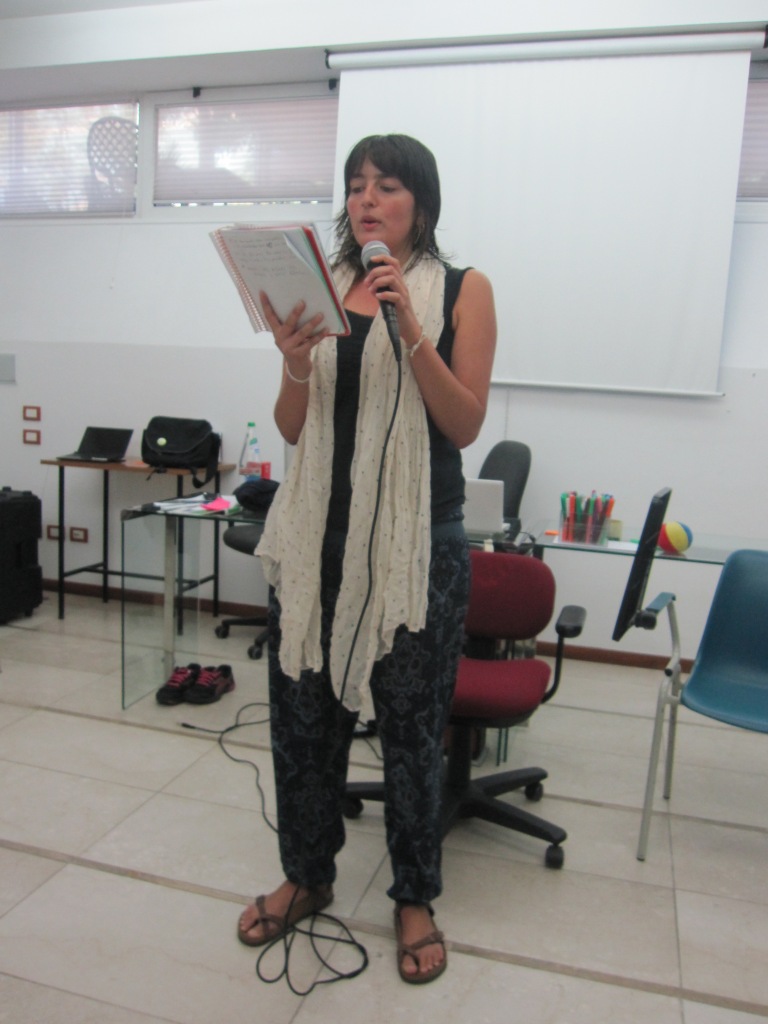 I need to learn about European projects, Erasmus+ projects because in the future we´ll develop this type of projects in my association .

I think that I learn a lot of things, also I realized that I need to improve my English. I think it is realy difficult to prepare this seminar, because inside of the group we have people with different jobs, expectations. Is difficult that all the activities are interesting for all but for me the structure and the methods are really really good . Today we made an activity called silent discussion and I liked it a lot, I think it is a interesting method because you can read and think with your time. 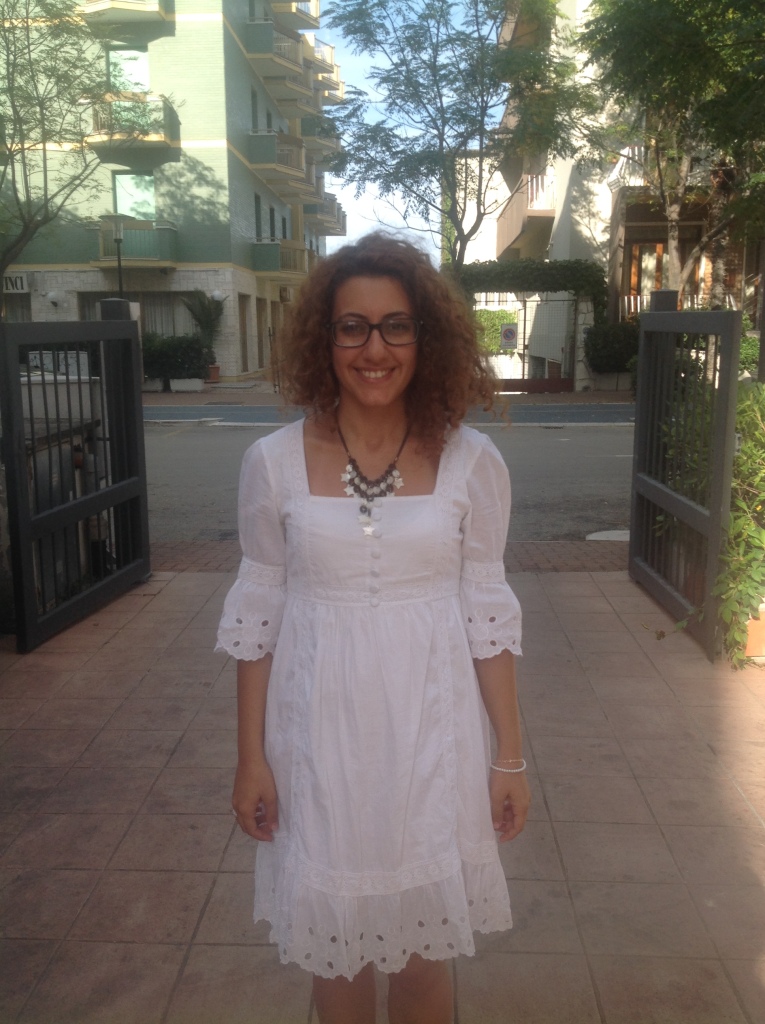 The main reason for me is because I met Vicolocorto before in a training course in Georgia in December. As I was really impressed by this NGO, I thought it was going to be great take part in another training made by them. Second reason is that inclusion is really an important issue for me, also for all the world, but in Turkey especially we have lot of problems about inclusion because we have people with different backgrounds, cultures, religions or ethnicity. For example there has been a war for almost 20 years between Turkish and Kurdish people, was a huge problem, so I thought that inclusion is a wonderful thing to learn about if you want to live in a good society.

I am learning a lot of things, actually, it´s the third day and each day is getting better and better than the other day. Especially today was perfect and I am learning so many things about the topic. For example when were talking about target groups that need to be included in the society, and one group talked about the pregnant teenagers, I was surprised that I never thought about this group as needed to be included. It never came to my mind, but it is also so important. I realized that there are so many people that need to be included and for sure much more then the ones we told.
Also in the silent discussion (for me the best activity of today because it makes you think better and deep), we all wrote “why to include them” , “how to include them” and everybody used the words “them” or “they” and at a certain point somebody said “why are you saying they? Don´t you think it is something like an hierarchical term? We shouldn´t say they, we should say “us” or “we ”. I was so impressed with this point of view!

That’s everything for today!