This day the participants went deeper into the topic of cultural difference, social inclusion and disability. What can we do to increase the social inclusion of minority groups who either have physical disability, an unprivileged socio-economical background or a different cultural or religious background? During two intense and interactive workshops, awareness about several factors that influence the issue of exclusion was created.

Workshop: Cultural differences and social inclusion
During this workshop the participants were split into three groups. Each group received a case that they had to solve. The cases were about the social exclusion of someone or a group of people based on either religion or socio-economical background. After solving the case every group had to show their solution in the form of a play. However, during their play other participants could step in and give unexpected reactions. With the situation changing, the original group had to find solutions on the spot. It showed the group how difficult it can be in reality to include people.

Group 1: exclusion because of social background
The first group had to solve a case in which they had to reintegrate a group of youngsters, who were hanging around on the streets all day, into society.

Their solution was to include the youngsters through a youth association, helping them to at least keep off the streets and do something more useful. However during the play they saw that it is very hard to earn the trust of these youngsters. They have had a very hard life. Why should they come with you? Why should they trust you?

Group 2: exclusion because of religion
The second group received a case in which a group of youngsters stopped coming to a youth centre because it was forbidden by their priest. He didn’t want these religious youngsters to hang out with youngsters who drink and smoke.

Group 3: exclusion because of socio-economical background
The third group’s case was about helping a school dropout that was kicked out of house and sleeping on the streets get back on his feet.

Their solution was to send this youngster on an EVS-project or Youth Exchange. These projects are funded by the European Union and do not require financial stability of the participant. Furthermore, this experience of non-formal education would help the youngster to develop new skills and as a result to get a job.

During the coffee break we had a short dialogue about inclusion. Julia (Austria) says:

‘There are so many ethical problems in society that create exclusion. For example the way elderly are being treated by the youngsters. I want to discuss these ethics and make children think about the problems. Youth workers often also have a young age, which is why they can connect better to other youngsters and help them change their ideology.’

‘Inclusion is a big challenge. The first time you try to include someone, it might not work out. But don’t give up. As a youth worker you might be the one that doesn’t understand the other person. Try again and see things from different point of views, because if we try to include everyone, we contribute to the confidence of someone and their awareness of their abilities. Everyone can then take part in society more actively.’

Workshop: Disability
The afternoon was about disabilities. Inga (Austria), one of the trainers, gave an interesting lecture on ‘Disability and the Independent Living System’. During this lecture she gave answers on questions such as: ‘What does the word ‘disability’ mean?’, ‘what kind of effect does society have on people with disabilities?’ and ‘what can we do to include them?’

Inga on the Independent Living System: 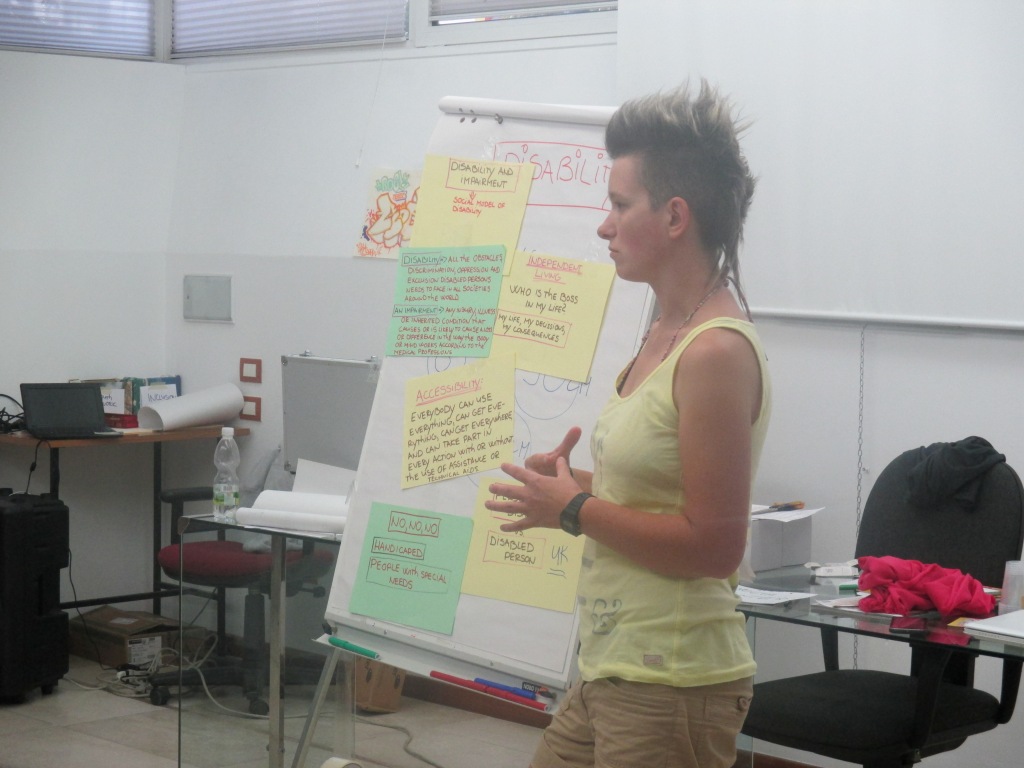 After the lecture all the participants were divided into three groups. Each group had to do three assignments, which had the aim of letting the participants feel what it’s like to have either a sensory or a physical impairment.

The first assignment was that they had to communicate without using words.

The second assignment was that they had to walk around the hotel blindfolded.

The third assignment was that they had to fold a paper boat by using just one hand.

After completing the assignments the participants discussed their experiences.

‘It was very hard to communicate without using words. I felt angry and impatient when I couldn’t understand or say what I wanted to say’.

‘When you are walking blindfolded, you really have to trust the person who is walking with you. Otherwise you feel so insecure.’

The participants had another day of gaining new insights.
Now up to the next day!