It’s not very usual to have the farewell party before the last day of activities… well, due to some logistic issues we had it three days ago. I’m writing this post travelling back home, it means it’s wednesday 8th of July. Making some basic calculations you can find out that our party was on sunday evening, so the following morning the participants had their final evaluation tasks. I really appreciated their affort to write down their comments, even because at the same time I had to digit at least some words for this report but I stayed stucked watching the laptop for more than an hour. That’s why I decided it was better to shut it off and postpone the job. What I did instead, was to take some pictures of the youthpass ceremony, where I liked this idea of Giorgi to give random papers to random people which then have to deliver each other.

After the ceremony I wanted to ask some impression about the project to Uliana and Dima, both from Moldova:

“The training course which I attended  was something new for me, because it was involved a lot of team buildings and group activities. Being present in it didn’t help me only to meet new people and new culture, but I learn some new things by deduction like team work, leadership etc. I came here because I am a volunteer and my next step is to coordinate a project. So this training fit in my goals and it was a nice tool which I can learn new things for my future staff. We played a lot of games in groups which made me reflect about my behaviour in teams, also we were defining a lot of concept, thing that helps us realize how different are the opinions and how to colaborate with people. From other side, we spent a great time together with participants, we discussed a lot about our cultures and about each one projects.” 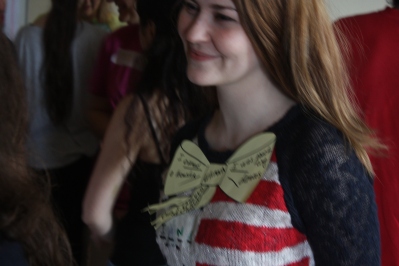 “These day’s we spent in the project were the best moments of the year in my opinion. It’s very interesting to meet other people from all around the world and especially that they manage to do the same volunteering work as I do in mycountry. I think that we became a family in this project and we were like people from one country not from different. We have had really great time and we learned a lot during the sessions thanks to our great trainers Laura and Giorgi. They really managed to enlarge our knowledge about volunteering in a creative and interesting way. I think that each young volunteer should have the same experience in order to be better in their organizations and maybe to create their own organizations. For sure i will remember this project , somehow it changes your life and the perceptions . Thank you for a great project and for the time invested and hope that we will meet soon in other great events and projects.”

As a conclusion of this serie of posts, I would like to let you know some random consideration that comes from my side. I’ll proceed following my writing instict, which means that maybe you won’t find a logical thread in what you are reading. But logic is often ovestimated!

That’s all people. I leave you with a sentence which comes from one of my favourite songs of Placebo: “It seems it’s written but we can read between the lines”.