How did I come with the idea?

At the beginning of my volunteering in Cingoli (November 2019) the president of the Red Cross, Maurizio, encouraged us to think about a personal project to develop during our stay in Cingoli. So, I started to observe and to think about possible problematics or realities to be improved in Cingoli or also inside the Red Cross. Talking with the other European volunteers (Aurélien and Carolina) we realized that in Cingoli there were many cigarette butts on the streets thrown by smokers. I thought that trying to solve this problematic could make a huge impact on Cingoli’s population, so I started to work on that.

Cigarette butts pollute the environment because they contain thousands of toxic substances. Moreover, cigarette filters are made of cellulose acetate (a type of plastic) which means they take a lot of time to be degraded in the nature. So, a huge number of cigarettes can seriously harm the environment. Also, in the nature it is only needed a single cigarette butt to provoke a wildfire.

Study of the problematic

I thought in dividing the project in two parts. First, we should do a study about the problematic regarding the cigarette butts to see if it really was a problem. I asked to myself how could we make the population realize that it was a huge problem. If we counted all the cigarette butts around the town and if there were a big amount of them, the people would probably reflect about it. So that’s what we did.

During six days I walked around the center of Cingoli counting all the cigarette butts that were on the ground. In total I counted 12,732 cigarette butts in a city where the inhabitants are around 10.000. For me it was a surprisingly high number considering that we are in a little village.

Using a grid superposed with the map of Cingoli I counted the specific number of cigarette butts in each specific area of the map. Using this information, we did a data treatment with Excel and Python to create a heatmap of the concentration of cigarette butts in Cingoli. With the heatmap we could see where the hot spots were. For example, we could use this information to place fix ashtrays in the most polluted areas.

As a curiosity, each day in which I counted the cigarette butts, about five people were asking me what I was doing. It was completely normal because it is kind of strange to see a guy walking slowly and looking at the ground. However, when I explained them my intentions, most of them were interested on the project and encouraged me to keep going. It was really recomforting.

After doing this study we realized that we had to take some actions to solve this problematic.

Actions to solve the problematic

Secondly, we should do some type of activities or actions to raise awareness in the population, mostly with smokers.

What I did first was to prepare an oral presentation to explain my project. As in the Red Cross we are having a weekly meeting with the young volunteers to talk and organize activities, they could help me in continuing the project. They were really interested and wanted to participate in that.

All together we thought that we could organize a day for picking up the cigarette butts, mostly in the most polluted areas. This activity could raise awareness about the problematic and we would clean the town of cigarette butts. We also started to prepare activities/games to be done in bars, as there are many smokers in these places.

We also had the idea in producing a personalized portable ashtray of the Red Cross to promote our project. The portable ashtray can be used when you cannot find a suitable place to throw your butt, for example when you hike in the mountain or there is not an ashtray around the streets. We made the design that you can see in the picture and we ordered a company to produce them. The idea was to promote them while doing activities to sensitize the population. 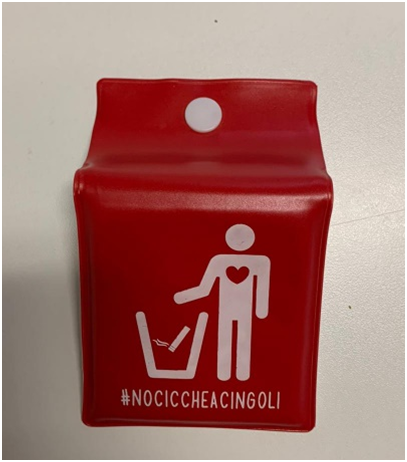 In addition, at that moment there was also a national campaign on TV tackling this problematic. The TV was going town by town interviewing the Mayors to make them fight against the pollution of cigarette butts. We thought it could be a great opportunity to show our project. As our goal was also to put ashtrays around the town, we organized a meeting with the Mayor of Cingoli (as we needed the approval of the town hall to put them) to talk about all these things. He was really receptive in what we proposed and he decided to contact the TV. He also was fine in putting more ashtrays around the village. So, we also started to collaborate with the local institutions. Everything was going so fine…

…but then, a global pandemic started…

Unfortunately, the project was stopped for around three months.

But there’s always light after the storm!

After the lockdown was finished, we slowly started to reinitiate the project. At the beginning it was hard to know how to move because the activities that we thought were difficult to perform in a secure way, and the reality could change at any point. So, we had to modify a bit our activities that we intended to do.

What we have done the lasts weeks is to deliver the portable ashtrays to the several tobacconists in Cingoli. So, the smokers that buy tobacco will have the option to get this portable ashtray. With the collected money, the intention in the future is to put fixed ashtrays around Cingoli, mostly in the most polluted areas.

Moreover, during all Tuesdays of end of July and in August there is the ‘Mercatino’ in Cingoli, where the Red Cross has a stand. In this stand we are promoting the project ‘No cicche a Cingoli’ also doing little games.

We also have done a video on YouTube to promote the project ‘No cicche a Cingoli’. You can watch it in the following link: https://youtu.be/BcgV7eIvdW4.

Finally, we have also presented a project to a competition organized by the International Red Cross. In this competition we could get funding to continue the project. In September we will know the answer.

In the future our intention is to do more activities related to the project.

Unfortunately, I will leave Cingoli at the end of August, but I am really happy of what we have achieved. I hope the project will continue when I leave.

What I learned doing this project is that you don’t have to give up when you initiate a project like this. You will find a lot of problems, but being helped by other volunteers and collaborating together you can take the project really far. Don’t try to do things alone because you will give up soon.

The most important thing is to enjoy what you are doing, have fun and collaborate with the others. Think that your action can make an impact on the local community, it is really satisfying.

I encourage to all the European volunteers to act and to start a personal project. Do it about a thing you enjoy, that’s the key.

2 thoughts on “NO CICCHE A CINGOLI, a project developed during my volunteering project”